Leading up to Banned Books Week 2012, ALA will highlight one book from its new timeline of banned and challenged books each day. Today we feature “The Satanic Verses,” by Salman Rushdie, which inspired one of modern history’s most dramatic censorship controversies — banned, burned, and sparking violence across the globe in 1989. 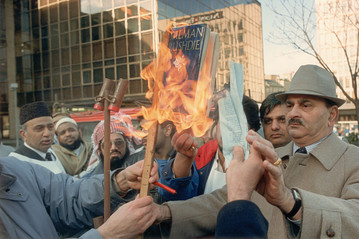 Published in 1988, “The Satanic Verses” sparked worldwide controversy for its religious content and alleged blasphemy. The novel was banned in Pakistan, Saudi Arabia, Egypt, Somalia, Sudan, Bangladesh, Malaysia, Qatar, Indonesia, South Africa, and India in 1989 because of its criticism of Islam. Sales of the book were restricted or criminalized in Venezuela, Japan, Bulgaria, and Poland. Iran’s Ayatollah Khomeini issued a fatwa or religious edict, stating, “I inform the proud Muslim people of the world that the author of ‘The Satanic Verses,’ which is against Islam, the prophet, and the Koran, and all those involved in its publication who were aware of its content, have been sentenced to death.” In the U.S., the novel was also challenged at the Wichita, KS Public Library in 1989 as “blasphemous to the prophet Mohammed.”

One thought on “Timeline entry for 1989: The Satanic Verses”