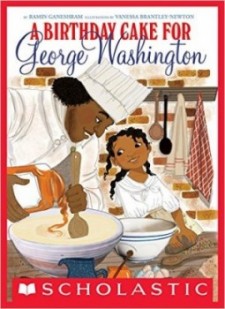 Usually, we think of censorship as the formal action of a government or government official: a school principal pulls a book from the high school library, a public library board votes to remove a title from the catalog, a university fires a professor who publishes something unpopular.
A Birthday Cake for George Washington, written by Ramin Ganeshram and illustrated by Vanessa Brantley-Newton, is a little different. This one, published by Scholastic, and immediately criticized for its portrayal of smiling slaves, has been withdrawn BY SCHOLASTIC.